When I first started this blog the dangerous Boys had just completed and survived a long and exciting adventure, this was the last adventure I described in the previous post.  It wasn’t long before we started getting D&D withdrawals and started marinating in the juices of anticipation that build up while waitnig for the next adventure.

This set of illustrations were produced during this period (some just before I started the blog) and are “Hypothetical”.  The adventure they aticipate actually came and went some time ago now (another very Epic adventure for which I am currently still in the process of illustrating).  I am quite fond of most of these so I thought they should see the light of day.  Infact the first two drawings in this post plus one of the drawings from the last post (Stimulating the urchin economy) were exhibited at the Brunswick Street Gallery in Melbourne earlier this year as part of a small scale art contest.  Unfortunately they didn’t win anything nor did they sell (Perhaps I should’nt have mentioned that they were all drawn on post-it pads, maybe it de-valued them).  Anyway here are the drawings in aticipation of the mighty “SNOMAR” adventure. 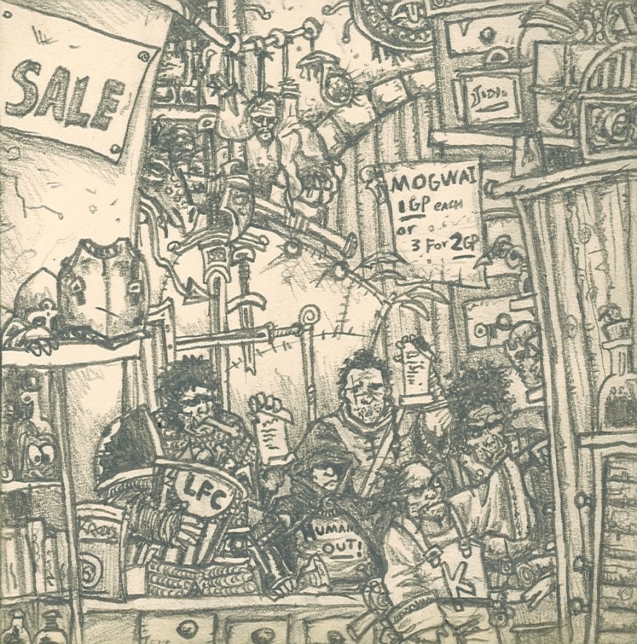 This first image is an impression of the possible appearance of Honest Kroddes Emporium at a time when the DB’s would be patronising it.  The existance of Kroddes Emporium (Or “Kroddes joint” in the Dangerous Boys vernacular) was a little hint of information about the upcoming adventure that the DM gave us as a little teaser.  we were told that at some point in the looming adventure we would get to do some shopping at this establishment (which apparently stocks everything that officially exists in the D&D world) and we could order any magic item we liked as long as it officially existed somewhere in the game literature and we could afford it (Krodde priced his stock according to the recommended retail price).  A torrent of carefully considered orders gushed at the DM and ranged from bastard swords that emitted no light all the way up the scale of awesome to an enchanted acid coated breastplate of awesomeness (this would be intended to deliver life threatening hugs and so forth).  There was also much discussion on what manner of shop keeper Krodde would turn out to be and how his emporium would be presented.  The comparisons with the shop form Gremlins where the 8o’s guy buys the Mogwais’ soon dominated the discussions as did a growing expectation that Krodde would also be stocking Mogwais’ and Mogwai related products.  the above illustration is the result of all these Krodde related hypothesese.  Of course when the time came to meet the famous man and buy shit from him he was nothing like the Gremlins shop keeper nor did his premisis resemble the hoplessly cluttered appearance of the Gremlins shop 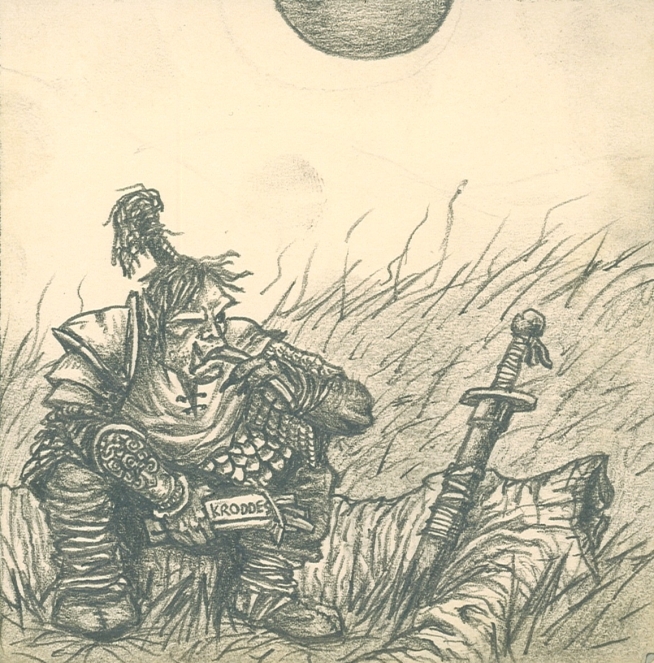 Mogwai jerky in the field

This image was born from further discussion on the hypothetical topic of “Krodde” brand Mogwai products.  It showcases the delicious and both highly portable and satisfyingly nutritious “Mogwai Jerky” snack pouch.  This was a hypothetical adventuring snack product that we began to expect would not only spontaneously begin to exist in the D&D universe but would also be available in handy ‘Krodde” brand pre-packaged portions at Kroddes.  Several orders for Mogwai jerky (of various flavours) were also placed with the DM.  This “tough as weathered elbow skin” adventurer that is demonstrating the Mogwai Jerky is nobody in particular, just some cynical Orc fighter with a moderate case of PTSD and a colorful history.  I felt like a break from drawing the DB’s.

Oh and in case anyone is wondering, Mogwai did actually feature in the adventure, just not in a form any of the DB’s expected. 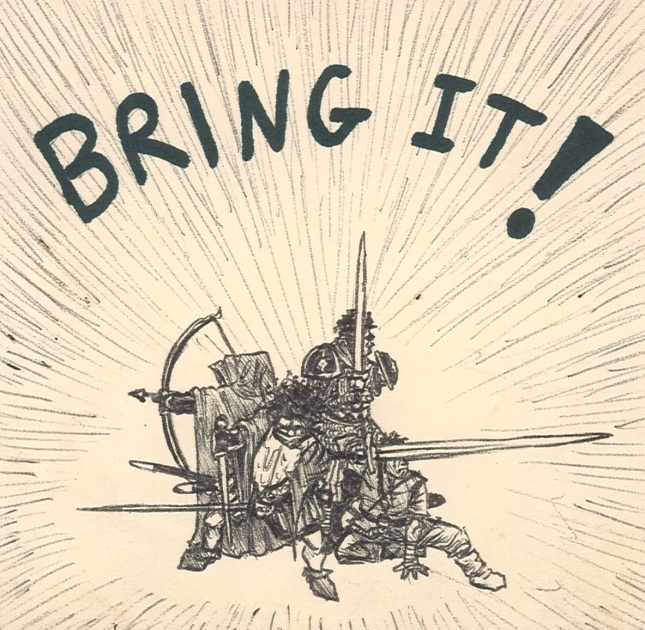 This image was a real quick one which I knocked up in about ten minutes just before I left work on the evening before the SNOMAR adventure.  SNOMAR was another teaser the DM had given us in the weeks leading up to this adventure.  All we had been told was that we would be crossing paths with a mysterious oranisation known as SNOMAR (this turned out to be an acronym).  The DB’s were all very cocky (especially Garibaldi) and certain that they would be able to permanently (and most likey violently) “solve” any problem that stood before them.  We were not afraid of the ominous SNOMAR and this image is an embodyment of these sentiments as well as a brazen challenge to the DM and his high rollin’ SNOMAR.  Incidentally SNOMAR turned out to be quite a handfull and were infact one of those problems you survive rather than solve. 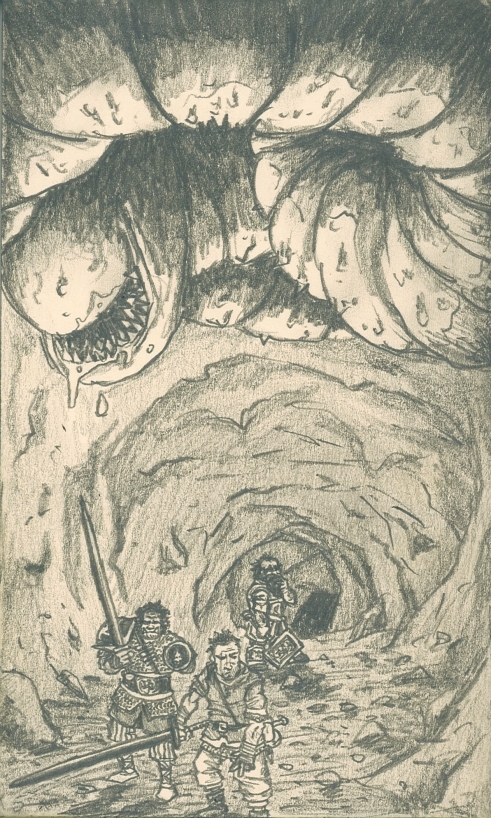 Billy, Garouk and Grim venture into the depths of peril in search of the “Heart of the Wyrm”

This drawing is not based around aticipation for the SNOMAR adventure as the previous ones were.  this one was drawn as a prediction for what may have lay ahead for the boys in the adventure following the SNOMAR adventure.  Unfortunately I was unable to attend this adventure, but I was still privy to the emails that circulated prior to it’s manifestation.  One of the last communications before this adventure went underway was the DM revealing the title of this adventure, “the heart of the Wyrm”.  Naturally after hearing this adventure title I assumed that the DB’s who were going into the breach would be facing off against some type of unspeakably evil worm like creature.  Something that lived deep in the depths of an unforgiving subterrainean labyrinth soaked in terror and dripping with sudden death.  I elaborated in my minds eye that they may infact be hired to snatch the ‘Heart” of this wyrm from its terrifying body or perhaps be journeying into the “heart” of the Wyrms lair to steel/recover/destroy or even deposit something.  either way I saw little in the DB’s future other than razor faced Giant Wyrms, Garouk eating chicken, Billy blowing all his money from the last adventure on booze and dice and Grim casting a lot of healing spells.  Hence the picture of impending Wyrm elated violence in an ambush prone underground tunnell.

As it turned out there was no Giant Wyrm, the “Wyrm” was infact (as the DM explained to me in an after game email) the Oroborus (http://en.wikipedia.org/wiki/Oroborus), the symbolic representation of time and eternity, for which an ancient temple/cave had been built. The heart of the wyrm was the treasure at the heart of the cave; a shard of the manifest-universe itself – the shard controlling time. An insanely powerful, fragile, unique and priceless item, sold for 20,000GP…

It seems Garibaldi missed out on a fine “Indiana Jones” style adventure.  Luckily the DB’s who were there have outlined some of the stand out moments in this adventure so I still plan to produce some illustrations for it at a later date.

Ok thats all for now,

the next post will start revealing what really went down in the SNOMAR adventure and to help set the mood a little I’ve included below a little preview of how Garibaldi finished up at the end of this adventure.  He is now known as Garabella. 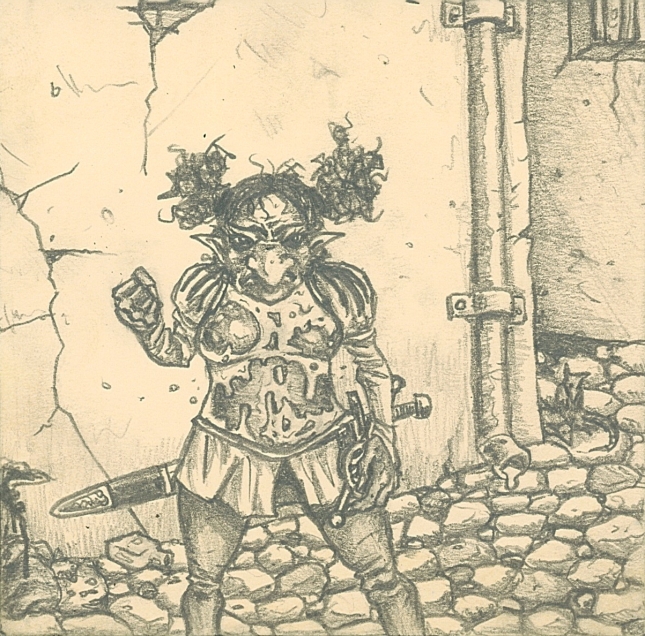