Seems like I may have a bit of spare time today so I thought I’d start posting up some more of the Existing Dangerous Boys artwork.  I’m planning to put the existing artwork up in chronological event order (rather that the order I may have drawn them in).  But first I thought I would put up the early illustrations that I did before I started recording actual Game events.  On that note here are the early drawings along with brief explanations.

I’m pretty sure this is the first DB’s drawing I did (Left). It is a simple rendition of what Garibaldi had been doing to pass the time since his first adventure.

I produced this one out of excitement after the next adventure  was announced. 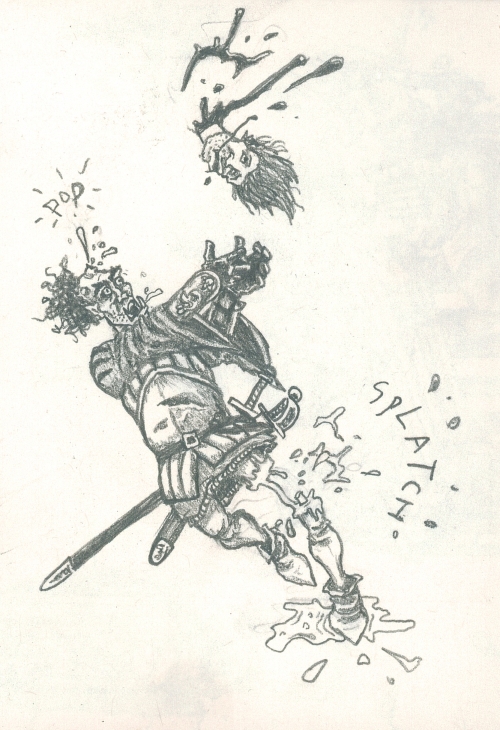 An Impression of the possible symptomatic complications that Garibaldi may suffer after being inflicted with a nasty case of VD. Demonstrated by this sub-par attempt at head catching.

This next Image (Left) was also drawn between the first and second Adventure and shows the possible complications that garibaldi might suffer performing his usual duties while afflicted with a virulent strain of VD.

One of our DM’s (Dungeon Masters) had threatened Garibaldi with contracting such an ailment during the next adventure he was going to DM.  I can’t remember why Garibaldi incurred this threat exactly, it could have been due to Gari’s persistent and probably irritating use of a 10 foot pole in virtually every situation that presented itself during this first adventure.  Whatever the cause of the threat, Gari took it seriously and stocked up on healing potions and expensive Kobold Skin contraceptives.

This Image (Right) is another impression of something which unfortunately did not come to pass.  I think it was produced between the second and third adventure.

There was some promising discussion on the subject of Garibaldi being allowed to “Throw” Grim at some point during the next adventure in return for Grim “borrowing Garibaldi’s magical wig for a while.  Although the awesomeness of such an occurrence was attractive Grim eventually declined to take part in the activity (I guess he has his dignity).  As fate would have it though Grim was actually thrown during the next adventure. He was “tossed” across an underground river of Dark Elf sewage by Garouk because he was too short and heavy to clear the jump unaided. Not swimming through dark Elf Refuse was it seemed a good enough reason to consent to being thrown.

Anyway thats all or now.  In the next post I will start putting up the illustrations of game events.  Or as we have been referring to them, “Historic Moments”.